On Thursday we decided to explore Mount Beauty. Mount Beauty was established in 1949 by the SEC to house construction workers for the Kiewa Hydro Electric Scheme. It is about 350km from Melbourne (Victoria, Australia), and about 35km from Bright. The seasons are very obvious in Mount Beauty: chilling winters, cool wet springs, scorching summers and colorful autumns. Each season has its own attractions: skiing, bushwalking / hiking, horse riding, gliding, bike riding (mountain and road) as well as fishing. Mount Beauty also has its own annual music festival, mountain bike competition and regular weekend markets. There are also some great views from and of the surrounding mountains. 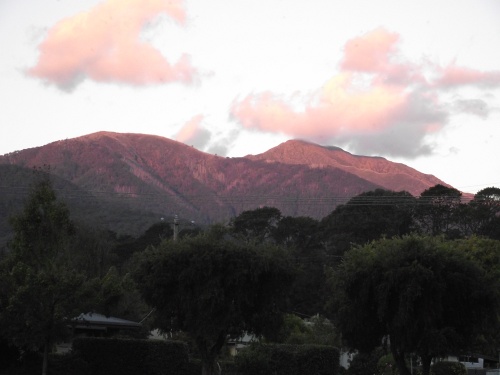 Above: Sunset reflecting of the nearby mountains.

As Zoe had a nasty bark and generally didn’t have much energy, and Rebecca had developed a stomach bug, we decided that we would walk to Pebble Beach, then Jesse and I would do a longer hike after lunch. So we found the walking track to Pebble Beach.

Pebble Beach walk is a very flat, very easy walk along a shared walking / bicycle path beside the river. There are some great views along the river, and with the leaves on the overhanging trees changing to their Autumnal color it looked quite serene.

Above: view along river looking towards Mount Beauty.

Pebble Beach itself is like most other bends in a river where pebbles of varying sizes can be found, with one exception – people have decided to build objects out of the stones at Pebble Beach. Exactly how this came about I don’t know, but it seems to have become a tradition and one of the tourist brochures we read encouraged visitors to make their own object out of stones. This makes it an interesting place to visit.

I tried building something out of the stones there, but didn’t have much success. And it seems the kids were more interested in throwing rocks back into the river! Along the walk there are a few places where the surrounding hills and landscape can admired. Mount Bogong, sometimes referred to as the Brooding Giant, is quite close to Mount Beauty and there are some good vistas of it from the path.

Above: View of Mount Bogong from Pebble Beach track.

Also along the track is the Regulating Pondage, close to the township itself.

This is a pondage that regulates water flow into the river, but exactly why it is there I am not sure. I suspect it is connected with one or more f the Hydro-electric power stations in the area and is used to store and release flows of water from power station/s so that it is released more gently into the river rather than causing a flash flood. By the time we got back to the car, it was lunch time. So we ate the usual camp lunch fare.

After lunch Jesse and I went on a more strenuous walk befitting people who be fit. The walk was made up of two sections – 1) Pole Track, 2) Survey Track. The brochure we got which had information on it suggested doing the Survey Track then the Pole Track, but being somewhat non-conformist I decided we would do it in reverse. So we started along the Gorge Track from the Mountain Bike Park, then turned into Pole Track. The section of the Gorge Track we used to get to Pole Track was easy – very flat, but Pole Track was very steep in places. Along the way there were some good views of the town.

Above: Mount Beauty from Pole Track.

Above: Another view of Mount Beauty, and along the Kiewa Valley.

The Pole Track was criss-crossed by a number of mountain bike trails. The bike trails themselves would have been hard enough to walk along let along ride a bike. I am quite sure it was considerably easier walking along the pole track (even the steep sections) than along the mountain bike trails! After about an hour we arrived at Cranky Charlies. Cranky Charlies is a location on the road to Falls Creek, and was named after a local land owner. My guess is that his name was Charlie and that he was known for being crankie. After a short rest and a well deserved drink of water we headed off down the Survey Track to return to Mount Beauty township. From the Survey Track we had some great views of the river far down in the valley below.

Above: View of the river from Survey Track. I think it is the Kiewa River.

There were also some interesting flora (plants). 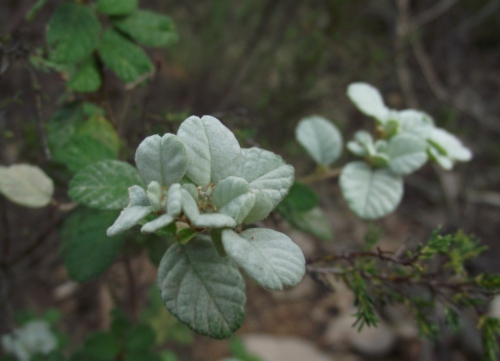 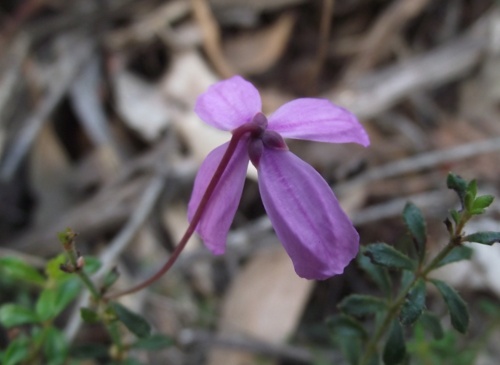 The survey track was built in the 1930s, and today is maintained by volunteers “for walkers and XC bikes”. For most of it’s length it is a single file track, quite different to the Pole Track which is a 4×4 track. We arrived back at the outskirts of Mount Beauty township near the golf course. And we decided to take a shortcut across the golf course and through the residential areas of the town. But in retrospect it probably didn’t really save us any time as we had to zig-zag through the streets to get to the park we were supposed to meet Rebecca and the girls at.

After we rendezvous-ed with Rebecca and the girls we drove the car to the car park at the Mountain Bike Park, and all set off along the Gorge Track. The Gorge is quite close the the township, and apparently leads to a shady swimming spot in the river. Along the way, there are some good views of the Kiewa Valley too. Along the walk there is a swing bridge spanning the river. 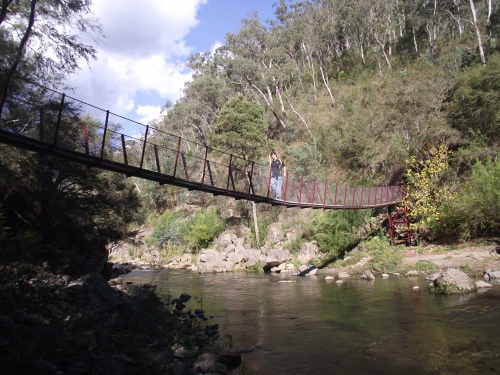 Above: swing bridge across the river.

The gorge itself reminded me of a gorge called Missinghams Steps, near Bowral in the Southern Highlands of New South Wales. But at Missinghams Steps, the walk goes from one side of the gorge down to the river and then back up the other side. At least at Mount Beauty Gorge the track goes more or less along the bottom of the gorge, so it is a much easier walk. Following a re a few photos of the gorge. 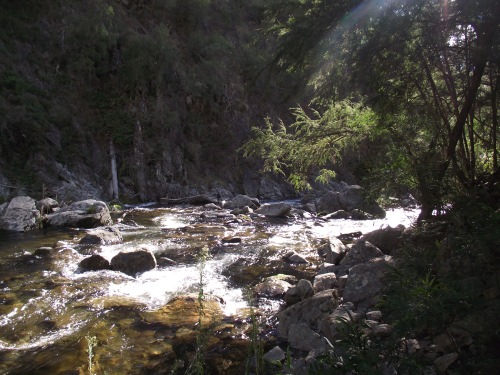 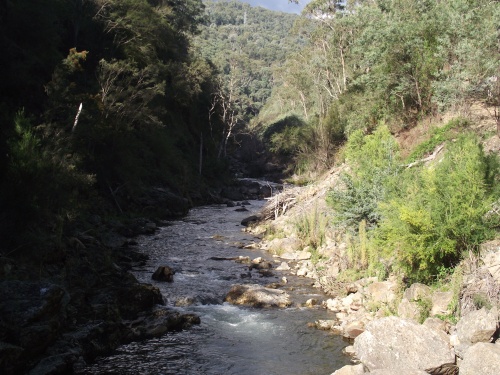 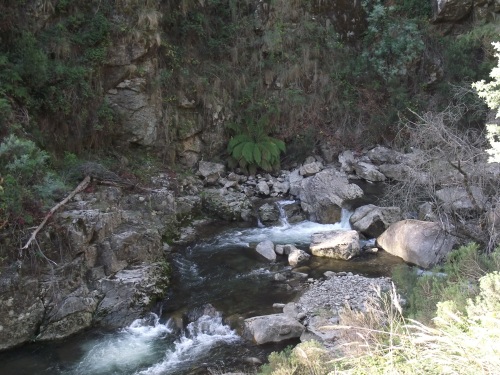 The last photo (above) is zoomed in from a point 100 metres or so away, and I suspect the most spectacular section of the Gorge was just around the corner. But the river level was high and would have required wading through to get to the gorge. As the water was really cold, and flowing quite fast I decided against this. While the view of the Gorge around the corner might have been more spectacular I figured it probably wasn’t worth the possibility of hypothermia!