Yesterday (Sunday 12h Oct) I was able to take part in a ‘not-quite-rail-trail’ ride. The reason it was ‘not-quite-rail-trail’ was because it followed as closely as possible where a planned rail trail would go, but was not on the exact route of the trail. The ride was planned by the Albury Wodonga Pedal Power group, a group of ‘lycra is optional’ cyclists who main aim is to enjoy the pleasures of cycling, having fun, excersizing and socializing ( website ).

The ride was to promote the idea of converting the disused Culcairn – Corowa railway line into a rail trail. These trails have become quite common in all areas of Australia, except NSW! Although it looks like that is soon to change. 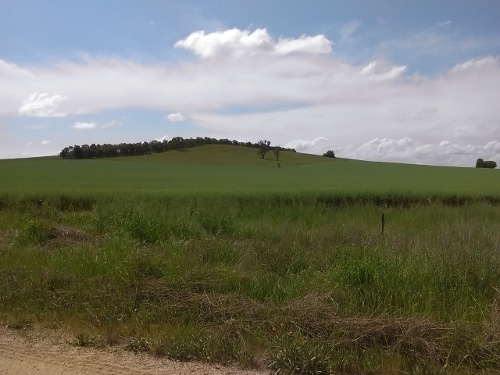 Various shots of riders on the ride

Probably the highest point on the ride, this was about 6km from Brockelsby, and a good place to have a rest before the final downhills into Brocklesby.

You can tell we are in the country

The plan was that when we reached Brocklesby we would attend the dedication of a tourism site commemorating a mid-air collision of two Arvo Anson aircraft near the town in World War II.

Then we packed the bikes into the support bus’s trailer, found seats in the bus and got to enjoy the return trip to Walla Walla in motorised comfort, eating orange cake and discussing the ride and riding in general, and the future rail trail. And something happened that rarely happens for me – I had a kind-of post-ride ‘buzz’, a sense of contentment and almost extreme happiness that I don’t remember ever experiencing after a bike ride. Maybe that is because I got to spent time riding with other cyclists (a rarity for me) in the beautiful countryside and a very pleasant spring day.

Bike trailer and packed at Brocklesby

Some of the group.

It’s been a year of ups and downs as far as my cycling activities this year. Here are some quick stats, courtesy of Strava …

That works out at :

Compare that with the cumulative total of all rides I have logged in Strava so far:

So the average ride length has gone up by a whole 1km per ride this year compared with the total cumulative distance average ride length! But that doesn’t give the true picture of what happened during this year. The graph below gives a more in depth look at my bicycle ride patterns.

The year started well, with a fairly intense few weeks of riding in January and a new personal distance record on a single ride of 76km up to that time. That ride also was beyonf mobile phone range for about 40km which gave me an increased sense of adventure! In the months that followed I did a number of 100+ km rides, and the longest of them, at 104km, is still my personal distance record. For the 1st half of the year things seemed to be going quite well, with my highest kms in a week ever occuring in March, but then after July the wheels seemed to come off my cycling efforts (excuse the pun). This was because of a number of things occuring around me and as a result me getting to the point where I had trouble finding the time and losing my motivation almost totally by September. That motivation came back for a few weeks in October, then the motivation went south again. And only really returned after the long weekend I spent in the Kosciosko National Park a couple of weeks ago. 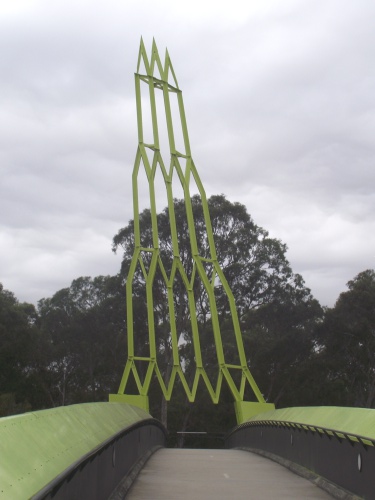 But I still made it to over 5000km for the year which is still a pretty good effort.

The highlight of the year would have to be the cycling holiday I did in March which included:

Who knows what 2015 will bring. I had planned to do the 25000 Spins Great Ocean Road ride in February but I think it’s unlikely that I will be fit enough to do that ride now – it’s going to be hard to get to 125km and decent elevation gain in a single ride (as has been suggested I try to get to). It’s also unlikely that my minimum fundraising target will be met.

Shelter near highest point on the Alexandra – Cathkin ride

I have a vague plan to try another multi-day bike ride maybe after the snow season in 2015, but that plan might also come to nought like my plan to be involved in the Great Ocean Road ride. Only time will tell. So the New Year approaches, and we tick over to the New Year. What will 2015 bring?

While I sit at home, battling a bronchial cough, and wistfully looking forward to getting back on the bicycle again, I have been considering how my cycling efforts might be of help to more than just me. There are obvious health benefits (not just physical but mental and spiritual as well) from cycling for the individual cyclist and I have been the grateful recipient of those benefits over the 5 or so years. But up till about a month ago my cycling has not been any real benefit to wider society. 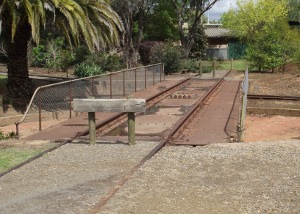 Corowa turntable on what would be the Culcairn – Corowa trail

About a month or so ago, I offered some photos to a rail-trail advocacy website. The result of that was that I was approached by the co-ordinator for Rail Trails for New South Wales ( http://www.railtrailsnsw.com.au/ ) and have been working as part of a team working on a proposal to turn the local disused railway line near where we live into a rail-trail. For those who don’t know what a rail-trail is, they “are shared-use paths recycled from abandoned railway corridors. They can be used for walking, cycling and horse riding” ( http://www.railtrails.org.au/what-are-rail-trails/introduction ). Over the last year or so I have personally experienced the benefits of rail-trails, having ridden a number of them so far:

And I plan to ride more as time goes on. I live in the state of New South Wales (Australia), but there are relatively few rail trails in this state. All the trails I just mentioned are in Victoria, which has developed the concept of rail trails to what I would describe as a ‘fine art’ – there are rail trails everywhere, and there are a number in various stages of development across the state as well. But New South Wales up till now has only a few trails scattered throughout its bigger-than-Victoria area! Hopefully that will soon change, and it’s nice to think I might had something to do with that.

Over the last year or so there have been a number of ways that my cycling could have been used as a fund raiser for charities helping those less fortunate. A cycling friend of mind suggested some time ago that I go on the 25000 Spins Great Ocean Road ride, and since the start of the year I have had that goal in mind. Well, yesterday I signed up for the February 2015 ride, and gave a sizeable personal donation towards the fundraising goal I have set. The goal I have set is $5000, and I have till late January to achieve it. But there is more than just a monetary goal – I have to be able to ride 300km in 3 days. So far I haven’t been able to achieve that, although I have managed to ride 200km in 2 days. Another milestone I will need to achieve before I will be physically ready for the ride is to do at least one 120km ride – so far 104km has been my longest. So there is a bit of work ahead before I am ready to embark on Great Ocean Road experience, but it gives me two goals to work towards and they will help keep me focused.

My personal fund raising page for the 25000 Spins Great Ocean Road 2015 ride is located at: http://greatoceanrd25000spins2015.gofundraise.com.au/page/JamesStanford if you feel inspired to donate.

So while I sit here coughing and spluttering and recovering, I look forward to the 25000 Spinsaventure in February, and getting back into cycling again and meeting the challenge.

Last September I had the opportunity to do some bicycle touring around various Rail Trails in Victoria (Australia). One of the biggest bug-bears of that holiday was the swooping of countless magpies, which is s common occurance for cyclists between August and October in many places in Australia. So this year I decided that my cycling holiday would be about as far from September as it can be – March / April! So in just under a week, it’s time for another cycling holiday.

This one will be quite different to the last one, in which I stayed a different town each night. The plan for the March holiday is to stay at my parents house for most of the holiday (they currently have a spare bedroom) and do a number of day trips along various cycling paths – some will be rail trails, and others urban shared paths. Here is the plan:

A number of the rides above are longer than 60km in length, the longest possible one will be about 100km (the Ballarat – Skipton rail trail). And even some of the rail trails will have some fairly relentless elevation gains. So it will prove interesting to see how I manage with the various rides, especially the longer ones.

Of course this is only a vague plan of the things I would like do over my holiday. It will most probably change. The weather may yet be the biggest influence for change of the above itinerary, followed closely by my level of fatigue as the holiday progresses!