Well, Winter has only just started in the Riverina district of New South Wales (Australia), and we have already had plenty of cold days. But over the last week, I have managed three very un-winter-like nature-based adventure activities – at least to my way of thinking.

Last Sabbath (11th June) I had a hankering for some walking. The sun was shining, and from inside the house it seemed like too good a day to waste it being inside. Outside it was still rather cold, but the sunny sky seemed to be promising a beautiful, albeit coolish, day. My darling wife must have sensed my hankering because she suggested we go for a walk in the Woomargama National Park (WNP), about 40 minutes drive away from where we live. The WNP is bisected by the Hume and Hovell Walking Track (H&HWT), a 400+ km walking track between Yass (NSW) and Albury on the Victorian border, and it was part of that walking track that we decided we would walk. So we packed a picnic lunch and drove towards the WNP. As we drove merrily along we noticed that the closer we got to the park, the more cloudy the sky got. And by the time we reached the Samuel Bollard Camping Ground on the H&HWT it was looking more than a tad threatening. But we started off on our hike anyway. The plan was to hike the part of the H&HWT between the Samuel Bollard Campground and Tunnel Road – not a long hike by any means, but as we had never walked in the WNP or the H&HWT it seemed like a good starter hike. We hiked a total of around 4km, and the photos below tell the visual story of our hike. 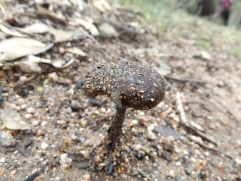 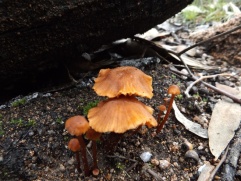 Fungus colony on bark of tree 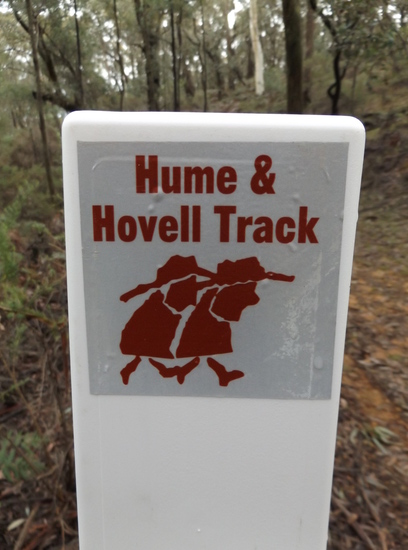 On the Sunday (12 June), it was an early start to be in Albury by 7:45am to meet up with the Albury Wodonga Pedal Power group (AWPP). The activity for that day was a group bike ride planned from Tumbarumba to Tintaldra then some lunch and on to Walwa – a distance of around 75km. About 13 riders were going, and 2 support vehicles to attend to any mechanical or other ‘breakdowns’ and to carry all our cycling kit except for water bottles. That was a good test of my new Jamis mountain bike that I purchased about a month ago and my general fitness. Both the mountain bike and I performed fairly well – the bike seemed really at home on the asphalt roads (I was admittedly a bit surprised at that), and my fitness level must have been ok too because I managed the climbs without any real need to stop and rest for any sigificant period of time (I was admittedly a bit surprised by that too) although the fact that I had two really long rests waiting for everyone else to catch up mght have had something to do with that. It was cool (well, it is winter), but the sun was shining with not a cloud in the sky as far as the eye could see, but I did spot some cloud clinging to the sides of some of the higher mountains as I pedalled along. Having ridden the road between Tumbarumba and Tintaldra a few times before I had a reasonable idea of what to expect although it’s always different on a bicycle as there is no motor to help get up the hills. I knew that from about 1/2 way along the ride I would have some more level riding and some downhill into Tooma. There was also the 270 degree vistas across to the Snowy Mountains, towards Tumbarumba, and towards the Murray River valley. 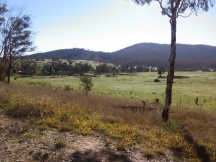 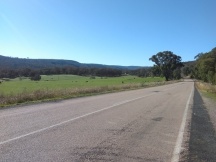 Two recumbent trikes that went on the ride 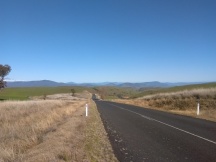 By the time I got to the Southern Cloud Lookout, I decided I had better wait for everyone to catch up. So while I waited (and waited) I stared in wonder at the view across to the Snowy Mountains with their snow capped peaks glistening in the sunlight. Eventually the rest of the group arrived at the lookout and it was decided, rather wisely, to have a late lunch (it was around 1:30pm by this stage) of all the munchies and teas and coffees that everyone had brought along. After some munchies and a chat, and deciding to terminate the ride at Tintaldra due to the time, we got back on our trusty steeds and either barrelled or sedately rode the brakes down the hill, or anywhere on the spectrum between those two extremes, all the way into Tooma. At Tooma there was a sign saying 18km to Tintaldra pointing along a steep dirt road, and one saying 20km via the asphalt and more level road – we took the 20km option. And within about an hour of that turnoff we had started arriving at Tintaldra – by this time it was about 3:30pm, and a bit too late to continue on to Walwa so we made the right decision to stop the ride at Tintaldra – a 55km ride in total.

Bridge across the Murray River at Tintaldar 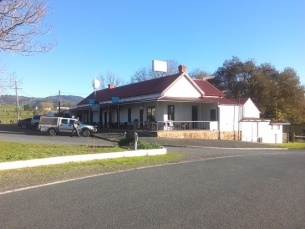 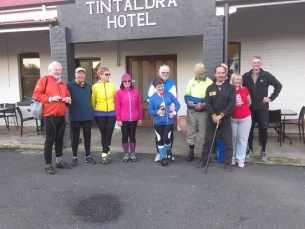 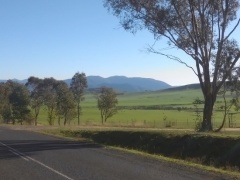 View between Tooma and Tintaldra 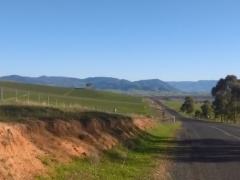 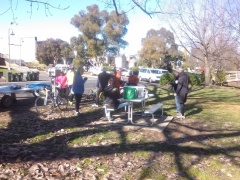 Then on Monday (13th June) which was the Queens Birthday Holiday, with another uncharacteristically sunny Winter day, and a weather forecast which included a lot of rain later in the week, I decided it was just too good a day to waste it being inside. So this time I decided to ride towards Holbrook and see how I went – remembering that I did a 55km / 900+ total climbs ride the day before and I wasn’t really sure how I would go. I needn’t have worried about being able to make it to Holbrook. I made it there and back with energy to spare although my legs were starting to complain a little by the time I got back home. 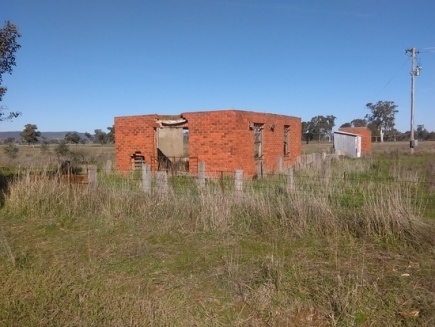 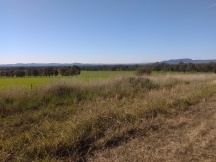 One of the many views – this one at Mountain Creek

I learnt something interesting on the two rides over the weekend. On both I took a mixture of trail mix (nuts, seeds, sultanas), cashews, and dates for some sustenance along the way. I also carried and drank plenty of water. It seems that the combination of those munchies (a nice mix of carbs, proteins and fats) and the amount of water helped keep my energy levels up considerably so I think I will make that munchie mix a standard for future longer distance rides. I also re-discovered the ‘after-ride-glow’ – a sense of persistent euphoria!