Over the last week I have discovered a few hidden local treasures. ‘Hidden’, because I didn’t realise they existed although people who have lived in the area longer than I have probably knew about them. And ‘treasures’ because they are public land (crown land) with interesting flora and fauna surrounded by cultivated farmland. ‘Local’ because they are within 20km of home. For those who don’t know what Crown Land is, it’s basically land help by the government in trust for the population and is available for the use of the population.

The first one I visited is called Wiesners Swamp, and is a 100 or so hectare tree and grassland reserve which I assume going by the name is also a seasonal swamp – it was not a swamp when I visited. The reserve is about 10km east from Walbundrie (New South Wales, Australia) and about 20km west from Culcairn on Ryders Road. I visited it on Sabbath afternoon and it was a great way to spend a couple of hours on a sunny and pleasant Sabbath day. I wasn’t sure what sort of wildlife to expect. I saw a mob of kangaroos, with a rather large male watching out for his harem of females – he would have been as tall as me I reckon. At another point in the reserve I encountered a rather large duck, which must have had a nest nearby as it flew above me in a figure eight pattern making a lot of noise, I’m guessing so I would be distracted from finding’s it’s nest. Little did it know that I was no threat to it whatsoever and that I was only out for a pleasant afternoon stroll. 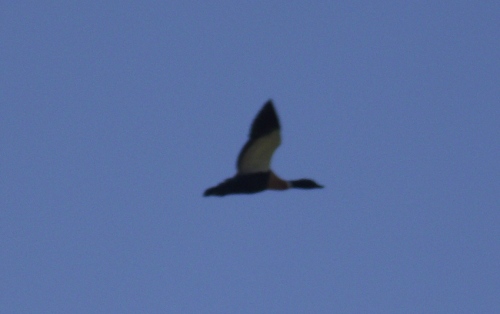 I also saw two trees ‘holding hands’, at least that’s what it looked like! I wondered how the two trees would have grown to be linked like they are. 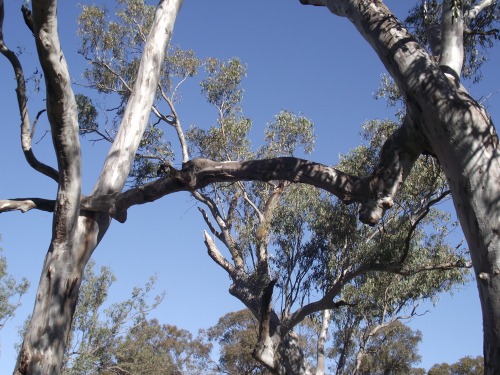 The second reserve I visited is about 10km west from Culcairn on Kings Bridge Road, and is called Kings TSR. I wasn’t sure what ‘TSR’ meant, so I looked it up on the Net and found out that it means Travelling Stock Reserve. There are apparently around 6500 TSR in New South Wales, covering an area of 740,000 hectares – a pretty decent amount of space! Although not a very high percentage (about 1%) of the overall land mass of New South Wales.

These TSRs are used as temporary grazing for cattle during drought times, and also help preserve native vegetation and woodland. They also seem to be a haven for wildlife, and provide a network of corridors for the movement of wildlife. While at Kings TSR I saw two mobs of kangaroos, a number of different types of birds, and a rather large lizard (maybe a lace monitor or perenti).

I also saw something that I have seen quite often in the Australian bush, but I don’t think I have ever featured on this blog – a tree with a huge ‘wart’ or ‘tumor’ – I am not sure what else to call it! 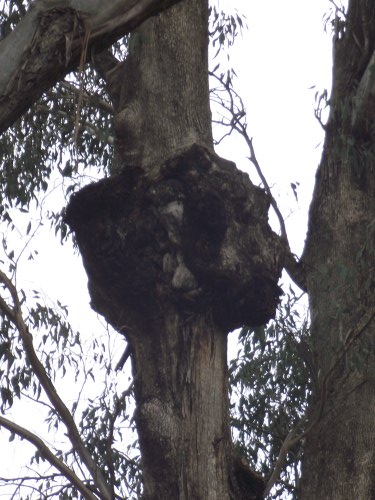 Tree with a wart? Or a tumor?

I found out from the Net that there are a number of TSRs around where we live, so I am hoping to visit some of the others over time, if I can find them! The directions for some of them are a bit vague, maybe on purpose.

While I sit at home, battling a bronchial cough, and wistfully looking forward to getting back on the bicycle again, I have been considering how my cycling efforts might be of help to more than just me. There are obvious health benefits (not just physical but mental and spiritual as well) from cycling for the individual cyclist and I have been the grateful recipient of those benefits over the 5 or so years. But up till about a month ago my cycling has not been any real benefit to wider society.

Corowa turntable on what would be the Culcairn – Corowa trail

About a month or so ago, I offered some photos to a rail-trail advocacy website. The result of that was that I was approached by the co-ordinator for Rail Trails for New South Wales ( http://www.railtrailsnsw.com.au/ ) and have been working as part of a team working on a proposal to turn the local disused railway line near where we live into a rail-trail. For those who don’t know what a rail-trail is, they “are shared-use paths recycled from abandoned railway corridors. They can be used for walking, cycling and horse riding” ( http://www.railtrails.org.au/what-are-rail-trails/introduction ). Over the last year or so I have personally experienced the benefits of rail-trails, having ridden a number of them so far:

And I plan to ride more as time goes on. I live in the state of New South Wales (Australia), but there are relatively few rail trails in this state. All the trails I just mentioned are in Victoria, which has developed the concept of rail trails to what I would describe as a ‘fine art’ – there are rail trails everywhere, and there are a number in various stages of development across the state as well. But New South Wales up till now has only a few trails scattered throughout its bigger-than-Victoria area! Hopefully that will soon change, and it’s nice to think I might had something to do with that. 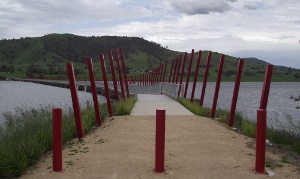 Over the last year or so there have been a number of ways that my cycling could have been used as a fund raiser for charities helping those less fortunate. A cycling friend of mind suggested some time ago that I go on the 25000 Spins Great Ocean Road ride, and since the start of the year I have had that goal in mind. Well, yesterday I signed up for the February 2015 ride, and gave a sizeable personal donation towards the fundraising goal I have set. The goal I have set is $5000, and I have till late January to achieve it. But there is more than just a monetary goal – I have to be able to ride 300km in 3 days. So far I haven’t been able to achieve that, although I have managed to ride 200km in 2 days. Another milestone I will need to achieve before I will be physically ready for the ride is to do at least one 120km ride – so far 104km has been my longest. So there is a bit of work ahead before I am ready to embark on Great Ocean Road experience, but it gives me two goals to work towards and they will help keep me focused.

My personal fund raising page for the 25000 Spins Great Ocean Road 2015 ride is located at: http://greatoceanrd25000spins2015.gofundraise.com.au/page/JamesStanford if you feel inspired to donate.

So while I sit here coughing and spluttering and recovering, I look forward to the 25000 Spinsaventure in February, and getting back into cycling again and meeting the challenge.